It’s time to introduce our shabab! I love this photo. It shows what the majority of the Syrian people believe in and want – peace. Even long before the war.

Rasha and I combined our names and called our excavation trench ‘Trasha.’ It was so much more fun to say than ‘Area B Square TR2010’ although I doubt ‘Trasha’ made it into the official reports. These are the guys from the local village that worked with us in our trench. Shabab is an Arabic word that loosely translates to ‘guys,’ at least for my uses. On slow days you’d hear a lot of ‘Yalla shabab!’ ‘Hurry up guys!’ They were all awesome and hard workers, though it took some time to get a few of them into a good work mode. This was mostly the younger ones though who were new to physical archaeology labor and needed some training.

At the beginning of the dig, Rasha would talk to them in Arabic, my Arabic sucks and I only know a handful of archaeology words and general conversation, and then translate to me. She did most of the official communicating back and forth though I always tried. Rasha had to go to another dig 5-6 weeks into the season so it was just me and the guys for the last bit. This was perfectly fine with me however some of them were wary of me and didn’t want to stay in our square without Rasha. They didn’t know how we’d communicate and were apprehensive. I already knew this wasn’t a problem after working for years in Egypt and getting along well with my Arabic speaking workers. I had to win over my shabab though! Which of course I did. I think it took the longest for Monsoor to trust me and to smile when we worked. But I did. He turned out to be very dedicated and a hard worker. In the end we all had a lot of fun and laughed. You’d be surprised at how well you can get along with people even with few words. Body language, drawing, and pantomiming are amazing tools for communicating, and for making friends. They’d play Shakira songs on their phones and we’d all sing along to “Shakira! Shakira!” You don’t need to speak the same language to appreciate ‘Hips Don’t Lie.’ Language barriers have never been an issue for me as long as I have my phrase books as a back-up and try hard to work with them. I didn’t realize how animated I am sometimes until I learned how to communicate as if I’m in an archaeology themed game of Charades, with props.

These guys live at the site. Literally. Their homes, still made of mudbrick today just like 5000 years ago, are built on top of the many thousands of years of occupation on the tell (Arabic for hill, what we excavate in the Middle East). Their sheep graze in the nearby fields and chickens get stuck in our trenches. The ancient world we are looking for is also their modern home. Because of this, it was even more important to maintain a good relationship with them and to show the guys all of the respect they deserve. They’ve been walking over old potsherds their entire lives and know some of it better than we do.

Having good relationships with our workers and the villagers makes being an archaeologist in the Middle East such a much more rewarding experience. These connections carry over beyond the workday into social interactions as well. Because we all got along, when there was a sudden severe windstorm, Fakri let us all hang out in his house and watch satellite TV until it was clear to work again. For second breakfast, we would gather in one of the living rooms of a local house compound instead of going all the way back to the dig house. One day, one of the local women shared bread fresh from the oven as she walked by. I’ve always said being on a dig is like grown-up summer camp – you travel away from home and make amazing new friends you may or may not see again in your life but whether or not you do, the memories and fuzzy warm feelings of friendship always stay with you. 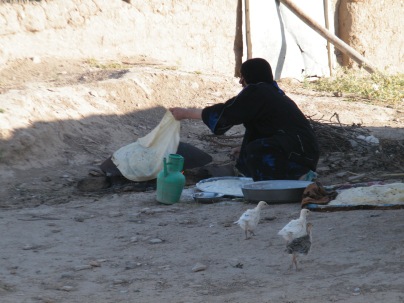 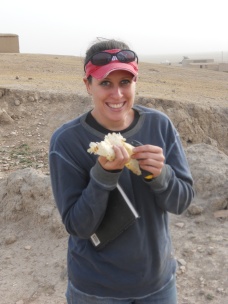